A Tribute to Gene Wood 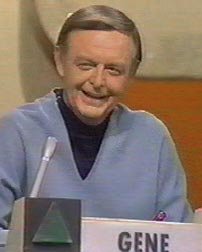 Yesterday afternoon, I recieved an IM from friend Seth Thrasher saying "RIP Gene". Not putting two and two together, I was uncertain who he meant, but it was two hours before I found out: Gene Wood, one of the best announcers in the game show biz, had died after a long battle with cancer. Knowing all that he achieved in his career, I thought it only fitting to write something in remembrance of him and his career accomplishments.

Gene began his career in TV as a writer for Milton Berle, clearly a sign of good things to come. Following an appearance on "The Garry Moore Show", he became a well-known commercial pitchman, doing over 100 ads in the 1950s, and later working for Bob "Captain Kangaroo" Keeshan. He also released a self-described bad comedy album ("What Would Have Happened If?") in 1960(?), but regardless of the content, it gave him a chance to show off comedic potential that would later serve him well in his career. Then, in 1965, came game shows. Goodson-Todman hired Gene as a fill-in announcer on their classic series "Password" as a sort of on-air tryout. It proved successful, and Gene was later hired on a full-time basis in 1969 for the syndicated G-T revival of "Beat the Clock" with Jack Narz, a role he quickly settled into over the next 3 years. In fact, so good was Gene at what he did that following host Narz's departure in 1972, Goodson and associates moved Gene in front of the camera to be Narz's replacement. He also hosted a similar series, "Anything You Can Do", around the same time, but in a true show of character, quit after several contestants sustained injuries while performing the required stunts. Despite lasting only two years, G-T apparently developed some strong feelings about Gene's potential, even letting him try his hand as a celebrity guest on two of their other series, "To Tell the Truth" and "Match Game '74", and just a year after BtC's cancellation, brought him back behind the camera as announcer for their new ABC series, "Showoffs"; it lasted just half a year, but Gene would not be kept away from the mike for long, as he was brought back just a year later for another new series, "Family Feud". As it turned out, FF was the show that put Gene "on the map" as an announcer. Host Richard Dawson quickly realized Gene had some on-camera talent as well and often invited him to appear during his opening monologues; during FF's 9-year run, you may have caught Gene: